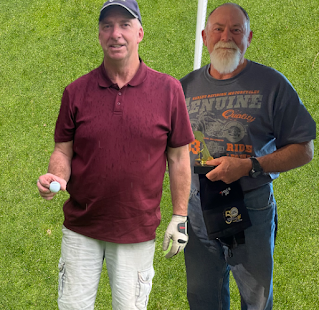 Over the past couple of weeks we have has a couple of Hole in Ones. On Sunday 11th September Jeff Shadbolt hit the perfect  iron to the 2nd and watched it pitch and roll in the hole and the crowd cheered  Congratulations Jeff On Tuesday the 27th whilst playing a couple of rouges the wind came up and it started to sprikle with rain but that never stoped Colm Carey from hitting the a 7 Iron that never left the hole, 2 bounces and a small rollout and in the hole. Congratulations Colm
Post a Comment
Read more 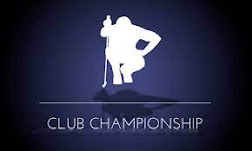 Attention Members The club Championship entry sheet is in the pro Shop and will be there until Tuesday 4th October. You will be able to see your tee times on Thursday 6th October. Conditions of Entry for Club Championships The Club Championship will be played over 72 holes and  Tee Times for the Championships will be seeded in handicap grades by the committee  A Grade 0 – 12  B Grade  13- 19  C Grade 20 – 36  All handicaps will remain static for the 4 rounds The Veterans Championships is for all members over 55.  Motorised bikes are allowed for all grades/events.  Competition fee of $20 per round with $40 for the first 2 rounds charged on day one.  Each round has a separate day event played under the championship handicaps  Any player reporting late to the tee will be disqualified under rule 6-3  In the event of a Championship tie in the scratch events, a sudden death playoff will decide the winner.  All ties in handicap (net) events will be decided by count back.  All events will be c
Post a Comment
Read more

ANNUAL GENERAL MEETING  NOTICE IS HEREBY GIVEN THAT THE ANNUAL GENERAL MEETING OF THE BREAKERS MENS GOLF CLUB WILL BE HELD ON SUNDAY 27th NOVEMBER 2022, COMMENCING AT OR ABOUT 12.30PM IN THE BREAKERS AUDITORIUM.  Nominations for the Mens Committee for 2022/2023 will open on Sunday 6th November 2022 and close on Sunday 20th November 2022.  Bruce Grant  Secretary Breakers Mens Golf Club
Post a Comment
Read more

The golf was going downhill for Geoff Byrne until the second nine when we reached the 13th hole  Geoff pulled out his driver hit a ball no higher than 4feet above the ground plenty of topspin the ball ran after hitting the ground he lost sight of the ball he said to us I think it’s in the bunker. As he walked up the fairway the group ahead said who hit that last ball as it hit the pin and stopped immediately, we reached the green there it was sitting next to the pin 160mm from the hole,eagles nest here he comes.
Post a Comment
Read more

Just letting members know that as next  Thursday being a public holiday, the pro shop will have social spots available for booking: between 6am – 7:40am and from 12:15pm – 4:30pm The course is improving daily so come and have a game
Post a Comment
Read more

Notice to Golf Members.  Due to the many cancellations of golf competitions this year, the committee has decided to cancel the Eclectic competition for 2022.   Golf Committee
Post a Comment
Read more 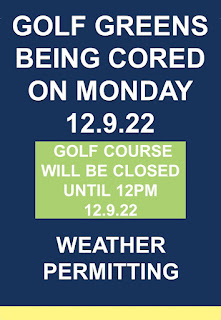 Members, Please be advised that the greens will be cored on Monday
Post a Comment
Read more
More posts